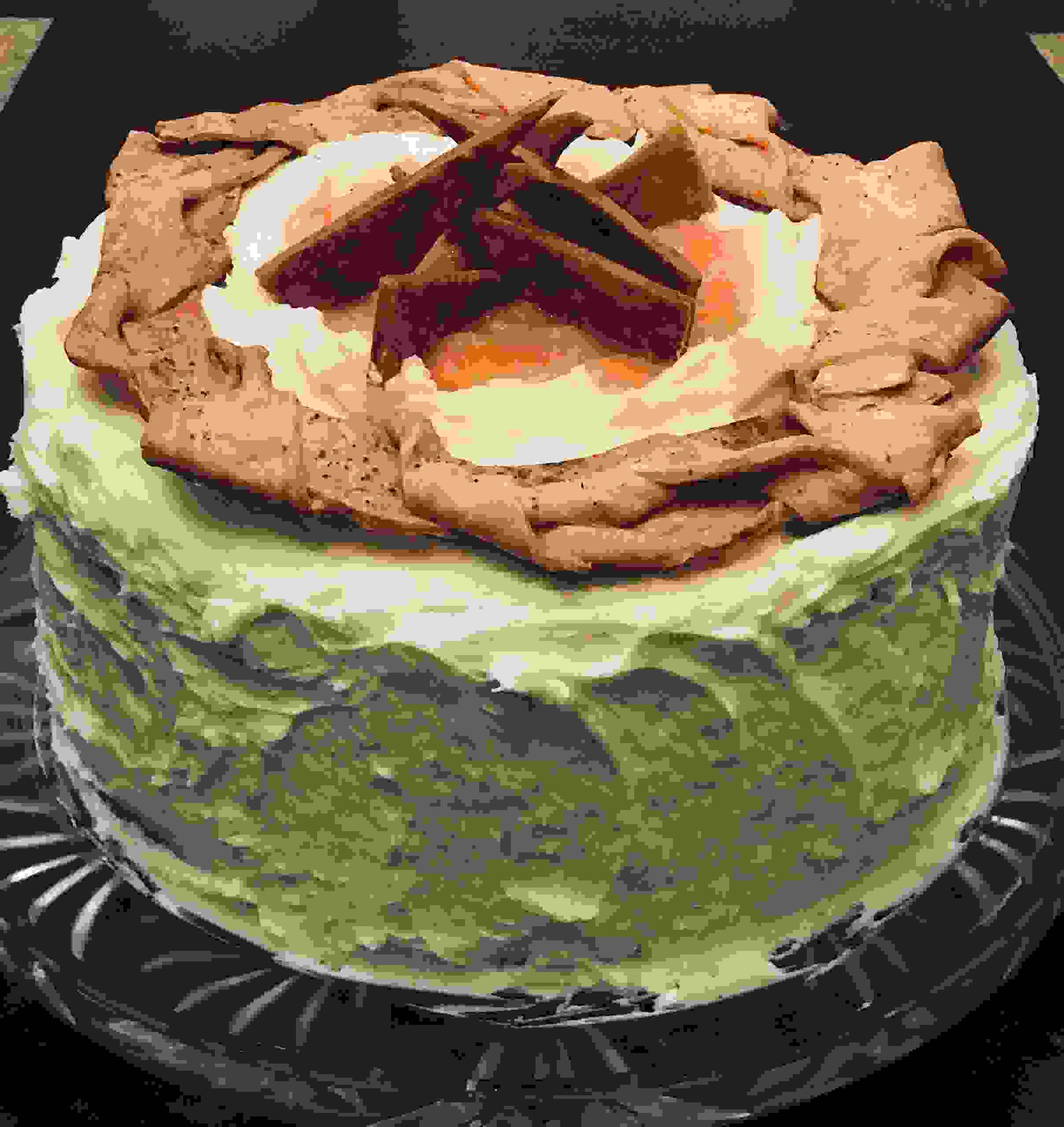 Happy Birthday or Any Day!

Birthday cakes have always been a tradition in my family. My great-grandmother made everyone a special cake for birthdays. This is my tribute to our family tradition. Hubby’s birthday is in the summer when peaches are ripe, so a peach cobbler cake seemed to be the perfect way to carry on the family tradition!

This cake serves 16-20 depending on how big you cut your slices.  It's a big one, not for the faint of heart.

Birthday cakes are special for a reason.  This is a process, don't give up, make the recipe your own.  Post your picture using #rubygeorgedeliciously!

For the Cake: Prepare two 9 inch round cake pans by spraying with baker’s spray. Using a large bowl with a mixer, cream room temperature butter and cream cheese until thoroughly mixed. Add lemon, vanilla, and maple. This will take about 3-5 minutes of mixing depending on your mixer. Add Eggs one at a time and continue mixing. In a separate bowl, combine flour, baking powder, cinnamon, nutmeg, and ginger. Stir together with a fork to combine dry ingredients. Add dry ingredients to wet ingredients in mixing bowl about ½ c at a time to avoid a dust cloud around your mixing bowl! Mix on low until incorporated. Batter should be the quite thick and the consistency of cake frosting. Divide batter between the two pans and spread evenly with a rubber spatula. Bake at 350°F for 1 hour +/- 10 minutes depending on your oven and location.

Beat room temperature butter on high speed until light and fluffy. Add vanilla and mix for a one second to incorporate. Add Powdered Sugar ½ c. at a time and beat to incorporate. Once all sugar is added, mix on high for 2-3 minutes. Drizzle in heavy whipping cream as you continue to beat with your mixer. Once whipping cream is added, beat on high for another 2-3 minutes. Frosting should hold its shape when smeared with a spoon and have a slight sheen. Store at room temperature until the cakes are cooled.

Pie Crust: Prepare a cookie sheet with a piece of parchment paper. Lay crust out on a lightly floured counter. Using an 8-inch plate as a guide, cut around the outside with a knife to make a smaller circle of pie crust. Use a smaller plate about 6-7 inch in size to cut the center of the circle leaving a ring of dough. Using the outside scrap ring, cut into 4 pieces and twist pieces around the 7-inch. Ring. Cut the circle into 16 pieces starting with a cut across the middle and then creating quadrants. Make cuts in the middle of each quadrant until you have 16 pieces.

For the Filling: Peel and dice peaches.* Place in a sauce pan over medium heat with honey, lemon zest, and spices. Cook, stirring occasionally until chunks are no longer distinguishable. The contents should look like dark peach jam. Let Cool.

Assembly: To assemble the cake, make sure all components are cool. Use a long serrated bread knife and cut through the middle of each layer so that you have two round thinner layers. Spoon half of the filling on the bottom cut side of the layer and top it with the other half. Repeat with the second round. Place the first layer on the serving plate and spoon approximately 1 c. of frosting onto the layer. Smooth frosting to the edge so that you have an even layer of frosting. Top with second round. Frost sides of the cake and then put remaining frosting on top. Make a small indention in the top of the cake and add remaining filling about ¼ c. in the indention. Embellish with pie crust.

*You can reserve the skin and reduce it down with 1 c. of sugar and 2 cups of water to make a delicious syrup for waffles, ice cream, or anything else your heart desires!

Sign up to receive menus, recipes, and insights in your inbox!